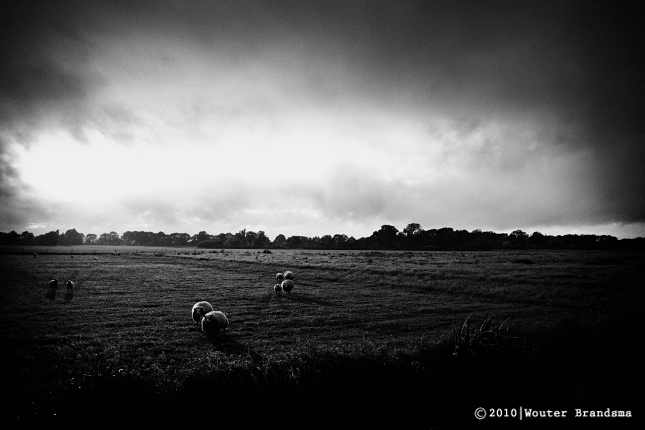 A photograph from a week ago. An unknown place for me and it had rained the entire evening. We drove back when the clouds started to break up. I just knew I had to take a photograph. The light turned very special. I stopped, saw a field with curious sheeps, and just knew it that it was right for me.

But when is a photograph right? When do you think it is good? And how do judge someone’s photograph when he or she thinks it is good? Now this puzzles me. I joined a local photo club this year and they already asked me to be a speaker after the holiday season and give critics. Of course I feel honoured and I like to take the challenge. But how do you prepare for something like that? What do you say?

They all say you should be as objective as possible. To find a balance between negative and positive feedback. Be polite, but honest. Basically tell the truth, but to remain respectful to the photographer. Not to be rude, but not to make things too nice either. But how can you be objective with critics? The photograph feels right or just not. You like it or you don’t like it. The critics should be on level with the experience and capabilities of the photographer, but just how do you know that? From most of the members I haven’t seen any photograph in the last half year. I just don’t know how good or bad they are.

I don’t want to hurt feelings, but I do believe sometimes it is better to be harsh with critics. At some point there will be a chance to praise the photographer too for his or her effort and progress. In the meantime I would love to receive any possible suggestions or remarks concerning this subject.

17 thoughts on “Glimpse of light”